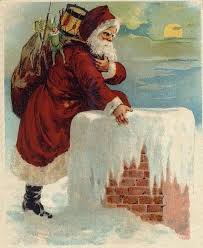 Tonight is Christmas Eve. That jolly old elf named Santa Clause will be making his way from rooftop to rooftop, down chimneys, delivering toys to all of those good girls and boys. Are your chimneys free of pests so Santa can safely make his deliveries?

Imagine poor Santa getting stung by swarms of bees, bitten by rabid raccoons, or attacked by nesting squirrels!

The truth is chimneys are a favorite hiding place for pests like rodents, bees, wasps, birds, and bats. Here’s everything you need to know about chimney pests; so you and Santa can have a safe, pest free Christmas.

Raccoons– are a common chimney invader. They frequently use chimneys for the birthing of their litters. Raccoons are very territorial and will compete with other raccoons for your chimney. When another raccoon enters, and kills the mother and her litter, it is very loud and scary. Raccoons can carry rabies, something Santa doesn’t want to contract.

Birdsâ€” are the some of worst offenders when it comes to invading your chimney. They love making their nests inside. When Santa comes down your chimney, you may have a scene straight from an Alfred Hitchcock movie.

Honey Beesâ€”are very selective when building their hives. If you seldom light a fire throughout the year, you will find bees building hives in your chimneyâ€¦ Santa could be stung!

Africanized â€œKillerâ€ Beesâ€”are not as selective when building their hives. All they need is an open space, sheltered by a wall with a small opening they can use for an entrance. Killer Bees are the most dangerous of chimney pests because they are very aggressive, are easily agitated, and attack in swarms. SCARY! Santa could be killed. Learn more about Africanized â€œKillerâ€ Bees by clicking here.

Miceâ€”commonly fall down chimneys while looking for food on your rooftop, but usually won’t live inside. Santa could get the Hantavirus or plague if bitten by one of these guys.

Bats– occupy chimneys during daylight hours grooming, sleeping, and resting; waiting for nightfall when they emerge to hunt insects. They carry rabies and other diseases Santa doesn’t want any part of.

Waspsâ€”build paper nests in places they find secluded; like your chimney. Some wasps like yellow jackets can be aggressive; and may attack poor old Saint Nick. They’ll head for Santa’s mouth, nose, and eyes first.

Rats– may carry a number of pathogens, which can result in the spread of disease. This is something that causes major concern for home owners, and Santa. They usually fall down your chimney on accident while scavenging for food.

Squirrels– build a type of nest, known as a drey, commonly found in forks of trees. However, they may also build nests in your chimney or in the exterior walls of your home. Santa could catch Lassa fever, and other diseases, if he comes in contact with their droppings.

Fliesâ€”will make their way down your chimney looking for food, warmth, and harborageâ€¦ Just like any other flying insect.

Santa Gets Attacked By Chimney Pests

Here’s a rather humorous account of Santa being attacked by chimney pests on Christmas Eve: http://www.bulwarkpestcontrol.com/community/chimney-pests-attack-santa.htm

Small rodents like rats, squirrels and mice, can easily get trapped in a metal chimney liner by accident. Once a rodent falls down your chimney, they will be forever trapped until a professional remove the critter. This is because chimney liners are not made for animals to grab on to with their clawsâ€¦ They will continue to slide back down to the bottom. Here are the dangers:

How To Keep Pests Out Of Your Chimney

Installing a chimney cap is the first preventative step that needs to be taken. It should include a wire netting that wraps around the sides of the cap; and serves as a barrier to animals that may like to make a home in your chimney.

Preventative treatments, like pest sprays, should be applied around the chimney top. Most pest sprays will work for flying insects like bees, wasps, and killer bees. When a bee detects a poison, it’ll return to the hive and report the bad conditions; thus choosing a different chimney or location to start a home.

How To Get Rid Of Chimney Pests

If pests do happen to make their way inside your chimney, it’s best if you contact a pest control professional as soon as possible. This is for your own safety. Seek the help of a wildlife removal company, or a bee removal company in your area.

If you discover you have a beehive in your chimney, the last thing you want to do to get rid of the bees is light a fire. Upon doing so, the bees will simply gather at the top of the chimney for as long as the fire lasts. The heat from the fire will melt the honey down the sides of the chimney causing a more permanent honey smell, attracting more bees each year.

It’s also important to note that the beehive is not always in the chimney flu itself, but in-between the flu and the chimney wall. In this case lighting a fire is pointless. Also, if it gets hot enough the heat may still melt the honey.

The bug buys here at Bulwark Exterminating would like to wish everybody a Merry Christmas, Happy Holidays, and a Happy New Year. May your chimney be pest free, clear for Santa to deliver all of his goodies; and may your Christmas be pest free!