First discovered in 2002, the Agra schwarzeneggeri is a carabid beetle discovered in Costa Rica. It is named after Arnold for the beetle’s physique. It has bicep-like legs which remind scientists of Schwarzenegger. Trilobites are extinct marine arthropods. The Norasaphus monroeae was named after actress Marilyn Monroe for its hourglass-like shape resembling the actress.

The flower fly Eristalis gatesi is found in the Costa Rican high montane cloud forests and is named after Microsoft founder Bill Gates because of his great contributions to the science of Dipterologvy.

The Aptostichus angelinajolieae is a trapdoor spider named after Angelina Jolie because of her work on the United Nations High Commission for Refugees.

The Aptostichus bonoi is a trapdoor spider found at Joshua Tree National Park in California. This prompted science to name the spider after U2’s singer Bono in honor of their 1987 album The Joshua Tree.

Click here to see the Top 10 Spiders Named After Celebrities.

The South African inspirational leader Nelson Mandela has two different spiders named after him. The Anelosimus nelsoni and the Stasimopus mandelai, both found in South Africa were named as a honor to the great leader. 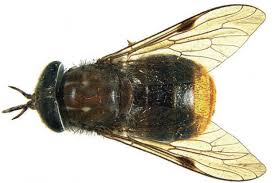 Having a â€œbootyliciousâ€ reputation, Beyonce has the Scaptia beyonceae horse fly named after her. The horse fly is found in north-east Queensland, Australia and was named after the singer because of the golden tip on the end of the fly’s abdomen.

A crustacean exclusively found in the Caribbean in 2002, the Gnathia marleyi, was named by science in honor of musician Bob Marley. The scientists that disovered the creature stated that it is â€œas uniquely Caribbean as was Marley.â€

A species of marine creatures, spirorbid worms were named Bushiella beatlesi Rzhavsky after the most famous band of all-time. Yes, worms.