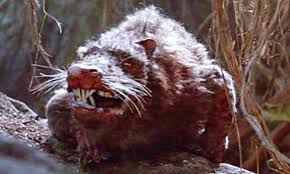 Mutant super rats is not the title of the next straight to DVD Hollywood horror flick; but rather a real problem plaguing cities in Britain and much of Europe.

A Plague Of Mutant Super Rats

Researchers claim in a recent study that a new breed of super rats are invading English cities, like Henley, and are completely resistant to pesticides because of years of genetic mutation. Authorities have adequately labeled theses rats as â€œmutant super rats.â€

Unfortunately, there are no discernable features that allow us to distinguish the super mutant rats from their brown rat non-mutant counterparts, despite the freaky picture below. The only way to tell if a rat is â€œsuper mutant,â€ is by testing the rat’s tails with new DNA techniques.

Pest control professionals are having a difficult time controlling the disease carrying pests because the rats are immune to common poisons. As the rat’s numbers grow, pest control professionals are beginning to look for stronger pesticides to help eliminate the mutant super rats. At this time, the government’s regulatory body is worried about stronger poison’s effect on other local wildlife so no such pesticides are legally available for use in combating the rats. Until then, the millions of mutant super rats are left to run amuck.

Out of the 10.5 million rats in Britain, three out of every four rats carry the pesticide resistant gene. That’s almost 8 Million mutant super rats roaming the city, spreading disease. The rats are being found in both urban and rural areas of Britain.

The reason the super mutant rats need to be eliminated, is because the transmit diseases to both humans and animals that can be life threatening. According to the Centers for Disease Control and Prevention, these diseases can include: Hantavirus, Plague, Rat-Bite fever, Lassa fever, Hemorrhagic fever, and Leptospirosis.

Rats are infamous for demolishing a property by gnawing on wood, plants and trees. They also destroy properties with their nesting habits, making their homes in trees and underground. Rat’s success as a pest is mostly due to their small size, their hardiness, their short breeding cycles, and their capability to eat a very wide variety of foods.

Rats are prominent wherever you see fresh gnawing, rat droppings, and/or rat tracks. Their nests are made from shredded paper or other material and are often found in sheltered locations. Most rats have an unpleasant, musky odor that identifies their presence. They are excellent climbers and can scale any rough vertical surface.

A Look At The Future

All this talk about mutant super rats has got me wonderingâ€¦ Are we really that far off from seeing walking, talking rodents like Splinter from Teenage Mutant Ninja Turtles?