I recently had fun compiling a playlist on Spotify of popular songs about bugs. Natural progression took me to putting together a list of my top 10 movies featuring bugs. Here’s my list counting down from 10 to 1:

A neurotic worker ant (Woody Allen), named â€œZâ€ helps princess Bala (Sharon Stone) escape her suffocating royal life. While doing so he meets many new friends along the way and discovers his own individuality; all while falling in love with the princess. The film give’s audiences a glimpse into the dynamics of an ant colony, and is packed with the voice-overs of many famous actors.

Them! is a cult classic and the first bug movie ever made. The film was influenced by the fears over atomic energy testing in the 1950’s. Atomic tests in New Mexico cause ants to mutate into giant man-eating bugs that wreck havoc on humanity.

A foolish entomologist, Dr. Susan Tyler, genetically engineers a bug to kill cockroaches in the New York subway system. The genetically engineered insect breeds, and rapidly evolves; having the ability to copy human form. Now the malevolent insects are out to destroy their only predator, by feasting on mankind!

Giant spiders attack a small Arizona town. Assortments of horrific venomous spiders get exposed to a toxic chemical that causes them to develop and grow to mammoth proportions. Really bad CGI, and blood and guts galore, make this a cult classic. Watch for spider cameos by jumping spiders, tarantulas, trap-door spiders, and orb-weaver spiders.

Barry B. Benson (Jerry Seinfeld) is a new college graduate who’s excited about starting a job at the â€œHonexâ€ honey factory. Barry seeks out on his own adventure when things don’t go quite as he expects at the honey factory. He makes friends with a human (Renee Zellweger) who helps him sue the human race for taking all of the bee’s honey.

This brilliant remake of the 1958 original, is widely regarded as a classic. An eccentric scientist, Seth Brundle (Jeff Goldbloom), is in the finishing stages of testing his teleportation machine when a house fly gets into the machine with him. He slowly transforms into a grotesque half fly, half man monster.

A clumsy inventor unintentionally shrinks his kids, and the neighbor kids, down the size of bugs. They are thrown out with the trash, and must make their way back inside the home to get their father’s attention. The treacherous journey back across the yard involves encounters with a scorpion, a bee, and other perilous insects. This film might have one of the best titles of all time. 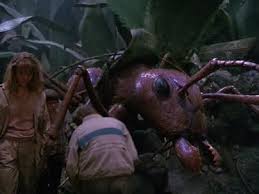 A group of grasshoppers bully a colony of ants until one particular ant (Flik) gets fed up. Flik ventures out of the colony in search of help and brings back circus bugs to combat the grasshoppers.

We must not forget that other planets have bugs too, right? The heroes of Starship Troopers combat arachnid like bugs on the planet Klendathu. The film was a massive hit at the box office, and spawned lots of sequels.

A recently discovered spider from Venezuela is accidently brought to a small American town, breeding with local spiders. This creates a new race of poisonous spiders that begin killing off town residents one at a time. Jeff Daniels overcomes his fear of spiders as he battles them to their death. John Goodman makes for one heck of an exterminator.

What Do You Think?

I had a lot of fun putting together this list of popular movies about bugs, but this is just my opinion. What are your favorite bug movies? I’d live to hear from you!